July 14, 2020
Few days ago India Government banned 59 Chinese apps on one go . There is also the most popular short video creating app tiktok in that banned list . Tiktok was one of the most used and loved short video creating platforms . Now after banning, the tiktok creators must be searching for a new alternative.. Meanwhile ZEE5 is coming with the new short video making platform HiPi very soon . 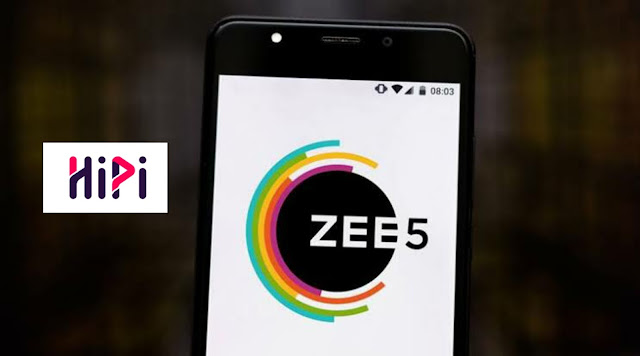 HiPi, a short-video creation platform ( like tiktok) launched inside the ZEE5 app.  ZEE5  had announced in February during its second anniversary that its short-video platform which is supposed to  offer up to 90-second videos created by celebrities, influencers, and creators is about to launch.

By following the  Atmanirbhar Bharat concept, ZEE5’s innovative and amazing platform called ‘HiPi’ is an one stop place where India can create the most ingenious and amazing content with the help of state-of-the-art features. It is the destination for all kinds of entertainment and a platform for fandoms and storytellers which they can call their own.  HiPi will compete with  Roposo , Mitron TV , Chingari  and others. Unlike TikTok, where the lip-synced videos are of 15 seconds, HiPi videos will be over a minute long. It will be free to begin with, but HiPi's ad-supported format could give way to a subscription-driven service integrating it more closely with ZEE5.
The name HiPi comes from the vision of a youthful and carefree planet where everyone can express themselves with freedom and confidence. An unlimited fun place where users can uninhibitedly and unapologetically be themselves without the fear of being judged.  HiPi also takes ZEE5 closer to its vision of becoming a "super app of entertainment".
Tarun Katial, CEO of ZEE5 India, said , they want ZEE5 to be the super app of entertainment and a one-stop destination for digital videos. People can watch series, movies and also can create short videos and be entertained at one place only . That's the only thought of Zee5 .
ZEE5 is already the most loved and one of the top OTT platforms in India . We shouldn't forget how ZEE5 served us the beautiful and awesome series during lockdown. This is one of those apps which is always very much careful about the viewers choice and need . Now when so much negativity is  everywhere, ZEE5's HiPi will bring a nice sunshine.. People can showcase their talent there as well as spend a good time also .

I am so excited for HiPi . New creators will come and now we can proudly say that this amazing app is by our own India made .. Stay tuned to ZEE5 for more updates on the HiPi platform..

Please do not enter any SPAM link in comment box